I’m an American, doggone it! I was a youth minister at a megachurch for over a decade. I’ve been to dozens of other megachurches. I’m currently an elder at a megachurch. For the past five years, I’ve worked with a mission agency that plants churches in Europe. I think I know how to plant and grow a church! (I think I know a lot of things.)

However, when I cross the Atlantic, I find I don’t know anything. I can barely get around the airport. It’s difficult to order a meal. I can’t figure out why Germans are so paranoid about the internet or why the French waiters think they know how I like my food better than I know how I like my food. I don’t know why Romanians will tell me as the church service is starting that they expect me to speak…a message…at the service they are currently beginning. I don’t know why eastern Europeans are averse to fresh air coming into a stuffy room. But this I do know: if I don’t understand those situations, I surely don’t know how best to plant a church over there!

Even if I learn a given country’s language (or languages), do I really think I’m an expert on the cultural nuances? I can still pull a quality cultural faux pas in America after living here for fifty years. Should I really be leading a team over in Europe? For example, should I join a team of Americans going over to Ukraine to plant a Ukrainian church?

Kontaktmission can save me from my own hubris. If I go to, say, Albania to be a missionary, KM will put me on a team with real live Albanians! Those Albanians will make sure I learn to speak Albanian (Shqip) the way they speak it in that region. They will also lead me through their cultural maze, rather than allowing me to assume I can figure it out or that somebody will just tell me if I’m being awkward. This will get me speaking and acting more like nationals much quicker an 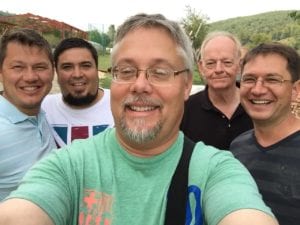 d with fewer public mistakes. It will allow the culture of the church to be, well, Albanian.

It’s comforting to know that even though I know enough to know I don’t know enough, I know I can have teammates who do know what I need to know.